Today’s question is from Melanie and it’s one I think a lot of folks can relate to.

“Michael, I really need your help. My boyfriend and I have been together for 2 years. I love him SO much and when things are good they’re amazing but… They’re just not good that often. I love him. He loves me. I have no doubt of that at all, but we fight ALL the time. And it’s been that way the entire time we’ve been together. Before we got engaged we broke up and got back together at least 3 times . . . I almost called off the wedding twice. We had blow up after blow up in front of our friends . . . Now it’s like we’re playing love roulette every time one of us comes home. Either we’ll fall into each other’s arms like giddy teenagers or we’ll go for each other’s throats . . .

So what do I do, Michael? I LOVE this man SO much but I’m so sick of being ANGRY and SAD all the time.”

OK, this is the hard part of what I do because I’m going to tell you something you don’t want to hear…

And that something is “Sometimes love isn’t enough.”

Yeah, yeah, I know; we all want the storybook romance where love conquers…

But we don’t live in a storybook.

We live in the real world where you need to be able to live with somebody as well as be in love with them.

The fact is that while relationships are always going to be work . . .

They’re not supposed to be THAT much work.

Honestly, I’ve been in a similar situation myself.I was desperately in love with a woman. We were together for over three years and in a lot of ways we were great . . .

But we had one major incompatibility that made me miserable, killed my self esteem and had me chewing my lip in frustration day after day.

So, what do you and your boyfriend do?

Option 1: If you haven’t tried it already, is to go to a good couples counselor in your area and talk things out. It doesn’t sound like you’re blaming your boyfriend for all the problems in your relationship (which is really good) and it’s possible you can work through your issues together.

Warning, though, after working with you for a while a good relationship counselor might tell you to go to option 2.

Option 2: Honor the love you have for each other by ending your relationship.

Like I said, sometimes love isn’t enough. And just because you love somebody, doesn’t mean you should be with them.

If you’re not happy and he’s not happy; if it’s been that way since day one, which it sounds like it has; and if it doesn’t seem like you’re GOING to be happy together . . .

Honestly, in my “Text Your Ex Back” business I tell people “It’s okay to break up once and get back together. If you break up more than once that’s it. It’s time to move on.”

Want to know how to make a woman fall crazy in love just by sending a few text messages? 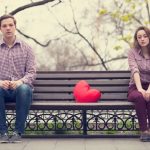